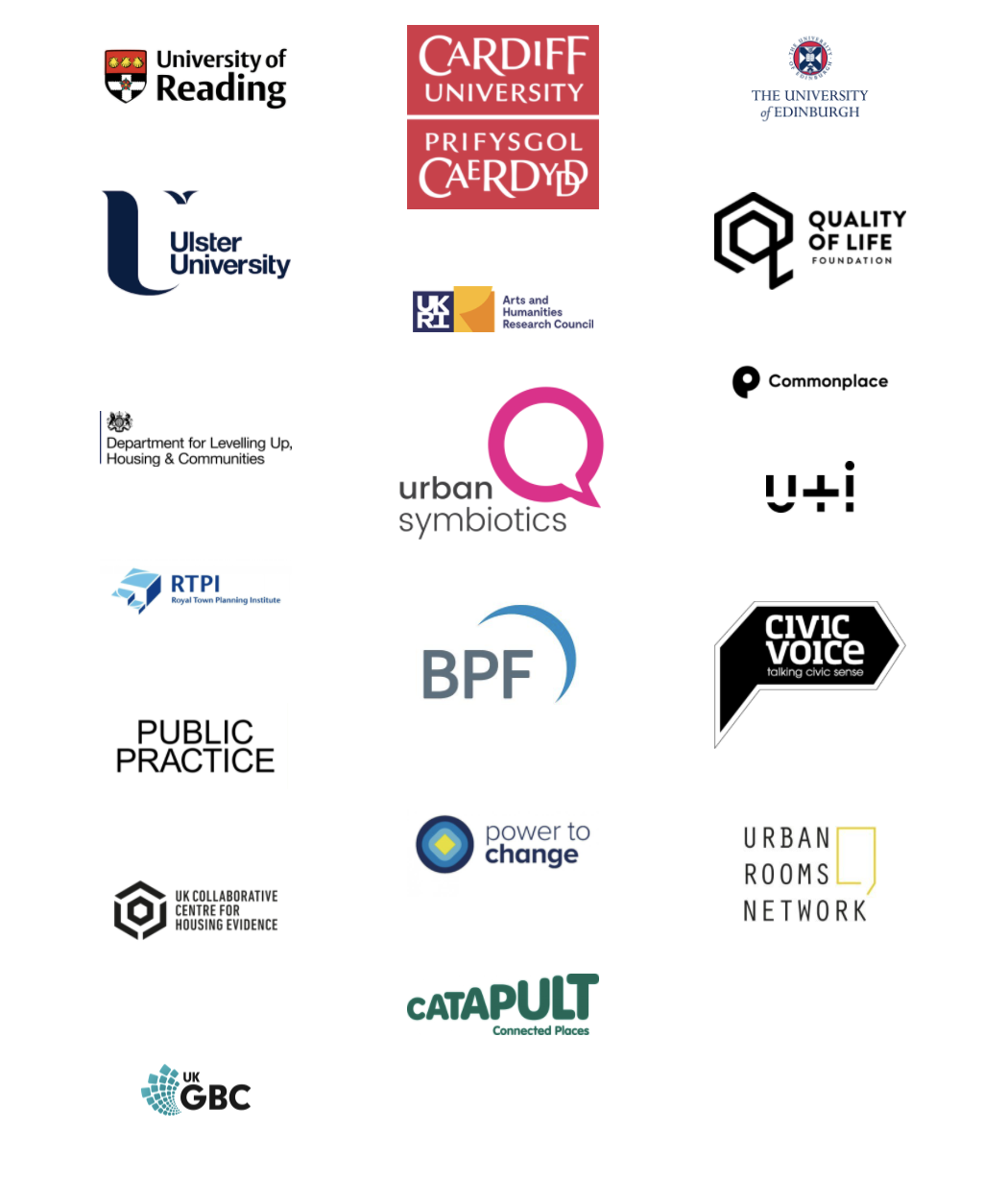 Advisory Group 2: the existing evidence and toolkit for engagement

The second CCQOL advisory group was an opportunity to hear about the research project’s systematic literature review; the toolkit for engagement; and each of the pilot projects in Reading, Edinburgh, Belfast and Cardiff.

The findings from the first stage of the literature review, into academic literature, demonstrated the lack of evidence around engagement in community consultation. For instance, there is no coherent published body that documents and synthesises the current local bottom-up initiatives; one that feeds into the political frameworks for influence. There is also a real need to carry out work on the impact of recent pre-application innovations.

The impact of neighbourhood planning frameworks needs to be examined more closely as these frameworks have tended to exacerbate inequalities, and research is needed to help create the right conditions to encourage participation in the planning process. In Scotland, changes in local planning policy have given rise to an interesting mix of localised and nationalised approaches that need to be examined in more detail.

Of our contributors, Stephanie Edwards (Urban Symbiotics) noted gaps on the secondary benefits of engagement, where you bring community groups together, enhancing a sense of community or social or mental health benefits. Vidhya Alakeson (Power for Change) spoke of research that shows there are wellbeing benefits, reducing social isolation benefits that come from the activation of the social networks that come through that.

So there is a spectrum of activation that gives you different sorts of effects based on who and how you engage with in the process. For example Diane Dever (Urban Rooms Network), said it is the ‘longitudinal’ aspect (the effect over time), that is important, and Max Farrell (LDN Collective) wondered whether there is any research comparing like-for-like for the same communities within the same geographical boundaries that looks at a comprehensive data-led engagement process versus a policy-led engagement process. The Foundation’s Director, Matthew Morgan, asked how to successfully translate the academic research to an industry and institutional audience.

“You tend to work in tangibles,” said Alex Green (Iceni Projects). “When, how, what and where for example. For a long time there may have been a focus on ticking boxes, but it would be really interesting to think of a way we can exhibit what works in practice and the outcomes of those actions. We all know that there is real value in community consultation, but if we evidence that through examples of actions and outcomes in real world case studies it would help make that value more tangible.”

“I think there’s a huge opportunity right now,” said Mike Saunders (Commonplace). “Central government is spending millions in the proptech arm of development right now that is aimed at local governments so there is an audience of local govts that have a lot of money to spend on consultation and there is an audience of companies like us that are also set up to help provide that consultation process. So I think that there are all sorts of opportunities to make those links and I think that we have some great research to be able to do that.”

Ruchit Prurohit (University of Reading) went on to describe the new engagement toolkit that is being created as an output of this research to try to understand how we can make our consultation more effective, useful and representative. (You can read his blog about this here).

In developing our consultation toolkit, we’ve been asking ourselves how we can make the Urban Rooms (acting as a learning space giving people opportunities to help redesign their local area), more accessible to the local community and what kind of programming is needed to help bring people together in these spaces.

Because Reading chose the Quality of Life Foundation’s six themes as the topic for its Urban Room, the tiles on the website correspond to those themes. Mapping exercises for each theme will help build a complete picture of the local area. This is then followed up by a short survey to help us better understand how participants feelabout the room itself and finally concluding with a survey to find out more about the participants’ backgrounds and demographics.

Diane Dever noted how useful this will be, particularly given how “Urban Rooms come from their own local context, so it’s quite hard to do a catch all.” Sadie Morgan (dRMM and Quality of Life Foundation) wanted to know what comparison or overview might tie the common themes together, and Flora Samuel (University of Reading) explained how the consistency across each site will be the questions around the Quality of Life Framework. Mymuna Soleman (University of Cardiff) wanted to know if there’s an opportunity to record the questions as an audio file for those who have difficulty with English as a second language. The project will use Google Translate, so we will need to see how well that accommodates minority languages such as Somali well.

In the context of consultation fatigue in Edinburgh, Tasha Mackenzie (Edinburgh Council) told how “we’ve been very upfront and honest with the communities about the scope of the consultation that we’re doing and letting them know for the outset.”

Report from the four pilot projects

Lorraine Farrelly: “We’re using social media to help engage with the community before the room itself launches. We want to reflect the issues that are backdropped with the ongoing Reading policy landscape. We’ve got an intensive week of consultation within the month that the room is open and the digital place will keep going beyond the Urban Room itself. We will also share and highlight the local community groups within the Urban Rooms as well.”

“We’re looking at the Urban Room to start in Mid-June. We pushed it forward so that we can get the bulk of the activity started before the school holidays to get as much of the face to face stuff done as possible. The key themes that we’ve been interested in is the idea of 20-minute neighbourhoods. There are a number of reasons for this: It is a useful way of making ideas around sustainability much more tangible, it ties into current policy really well.

Saul Golden: “We’re still in early stages with Belfast City Council and our local advisory group, looking at city centre venues and themes focused on living in Belfast, connections and disconnections of the city.”

Mhairi McVicar: “Mymuna and Shoruk have joined the Cardiff team which have been embedded in the Grange Pavilion. There is focus here on Child Friendly Cities, which has been supported by UNICEF funding, as well as Well-being of Future Generations (Wales) act of 2015.”

Vidhya noted the constant challenge to bring in other groups that are often left behind, so “there is a question in understanding with a good level of depth about what each of these rooms are using as their key methods.” And “how much we will be able to relate what is happening in each room to the wider policy context – or is that too far removed?”Flora Samuel answered that the national reports will be able to pull together the different experiences into one document so that we can make recommendations based on those.

“The policy is an outcome,” Saul said. ”But the interest for us is how we can engage people more deeply in our consultation. So that we can see what can help us reach out to specific audiences and communities.”

“The bigger question across the four nations,” Mhairi McVicar said, “is about how we might improve the consultation process but the local question is a different one; it is about how we can make it tangible and meaningful for the local community. So in Cardiff, we don’t have our four weeks planned out yet but that will be something that will come out of the conversations that we’ve started having with the community.”

The Quality of Life’s Community Consultation will conduct a grey literature review consulting industry associates from spring to autumn, which will be published this autumn.

Quality of Life Foundation is incorporated and registered in England and Wales (company number 12062786) and registered with the Charity Commission (charity number 1198624).